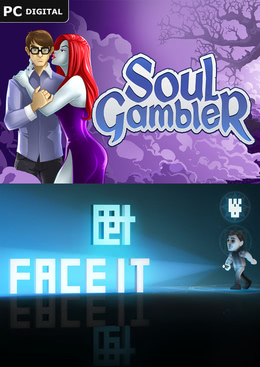 Soul Gambler is an interactive graphic novel inspired by Goethe’s Faust, a tragic play written in the 19th century. This is a contemporary and engaging adaptation of the masterpiece. Soul Gambler puts YOU in the role of Faust, an ordinary young man living in the present day whose destiny is about to be change forever. When Faust was leaving his boring job, a mysterious woman approached him. She made him a tempting proposal: sell parts of his soul in exchange for the fulfillment of his every wish. Now it is up to you to decide his fate. What are you waiting for? Time to gamble your soul!

A surrealistic adventure through a labyrinth of emotions with abstract elements awaits you in Face It, the second game in the Inner Demons Pack! Negative emotions such as fear and grief are embodied by monsters and traps, while positive emotions such as hope and love represent the powers you will need to successfully complete the levels.The levels represent dark aspects of the human consciousness, such as fear or despair. By successfully completing a level you get positive qualities like love or truth.