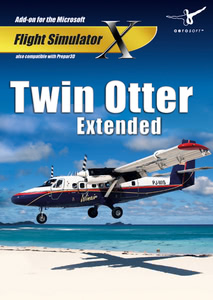 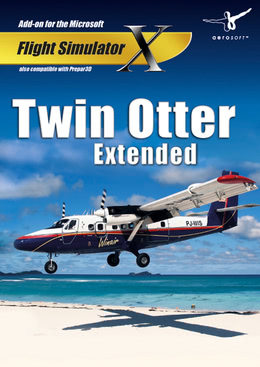 The Twin Otter is truly the small airliner that does it all. There is no aircraft that can land on tarmac runways, mudflats, water, sand, snow and ice. There is also no aircraft that does regular scheduled flights in both the Polar Regions, to airports at extreme altitude, tropical islands and to a beach in the UK. And it still does all that after decades or service. It is really a remarkable aircraft. Do not underestimate the Twin Otter, it is not a large twin engine general aviation aircraft, in complexity it really is a small airliner and the Twin Otter Extended will show the aircraft in its full complexity.
The version for FSX and P3D that we created is remarkable as well. Not only does it represent the best in modelling (with 2k textures), it also comes with complex systems, the best implementation of turbine engines to date and flight models are as accurate as possible and tested by several Twin Otter pilots.  Where FSX default systems are not good enough we complete replace them with our own modules.
The aircraft comes equipped with skies, tundra tires and floats so there will be no place where the trusty Twin Otter will not be able to take you. With versions for cargo and passengers, 100 and 300 models and different engines we cover the whole range of this amazing aircraft.
The experienced simulator fan will be able to start the aircraft with all the checks and tested that are needed, but if you like you can also use the advanced interactive checklist to guide you from step to step or even to jump directly into an aircraft ready for take-off. We feel this is an ideal way to make complex aircraft usable for all users.
If you wonder why we called the project the Twin Otter Extended, it is because this is the third time we are modelling this aircraft for Flight Simulator, but this is the first time we decided to make it a true high end project.