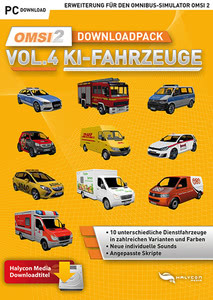 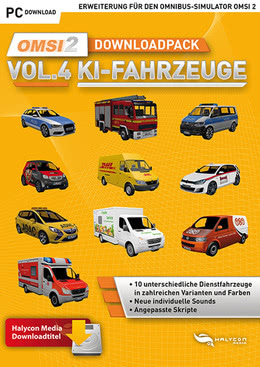 Be it the pizza delivery man or parcel service driver who delivers the ordered goods to the destination, or even the breakdown vehicle that assists the other drivers with a good deed. Also, an ambulance, a fire brigade and different police cars are included.

Of course, learner drivers should not be missing in virtual road traffic, even if they sometimes obstruct you, but everyone started as a driving student, right? The OMSI 2 Downloadpack Vol. 4 contains a total of 10 different types of AI service vehicles, which are waiting to be used in various OMSI maps.

The vehicles are included in different versions and numerous repaints. Individual sound provides a realistic background noise. Some of them have their own scripts for a suitable driving behavior in OMSI road traffic. The AI vehicles are not self-propelled.

Predefined AI lists can be used for more than 10 popular OMSI maps. With the OMSI 2 Downloadpack Vol. 4 - AI Service Vehicles your OMSI map gets more AI vehicles, which make the virtual road traffic even more realistic.