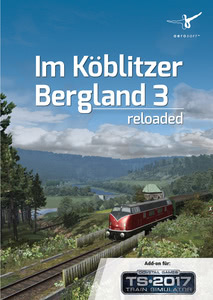 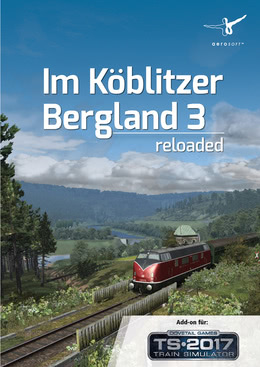 In this new version we implemented some suggestions coming from users. The goal was to allow more interesting scenarios and to remove some minor bugs. We implemented the newest version H/V and semaphore signaling system of the SignalTeam as well as the new Ks signals. For the PZB we used the 500, 1000 and 2000 Hz magnets of virtualRailroads.

This version of Koeblitzer Mountain Route has some new features and expansions. You will find a high speed track where you can drive with LZB (continuous automatic train running control). The new shunting station Altenburg — Nord gives you additional possibilities for scenarios.

Geographically it is situated somewhere in the region of Trier, in the westernmost part of Germany. It has taken the developer two years to build this imaginary route which gives the impression to be a real life scenery in the West of Germany.

The Add-on is timed in the early years of 2000 when maintenance of tracks and railways was not a priority. Stopping points and former stations are overgrown just as the unused tracks which haven´t been used for a long time. Modern shelter huts can be seen next to old stations which are no longer in service. Abandoned stop stations have made the way for car traffic and signal boxes have been modeled with broken windows as dispatch and organization have all been centra¬lized. Everything that reminds the rail fan of the good old times can be seen in this Add-on not only in a melancholic way but also with a wink of the eye. Nature is claiming back its territory.

Be enchanted by driving along the 22 km track from Koeblitz to Wildau. Discover the lovingly arranged scenery to the right and left of the tracks. Enjoy travelling with high speed on the 20 km ICE track from Bad Rinckenburg to Altenburg. Feel the charm of gone-by railway times on one of two heritage lines. Drive along the electrified main line and step up to its challenges: unfenced crossings, gradient and speed changes will need your com¬plete attention. Enjoy the beautiful scenery while comfortably driving on the branch line tracks through the Koeblitzer Mountains or feel the stress while trying to keep the regional express on schedule. Many connecting tracks create possibilities for new and interesting scenarios.

The developer Roman Glos put the signals on ist place and Mathias Gundlach and his team delivered changed and corrected H/V-, KS- and semaphore signals. The EL signals are from virtualRailroads and from RailTraction we got the LZB triggers for LZB driving on the high speed track.

To get next to reality we implemented train- and station announcements in all scenarios and dialogues between train driver and dispatcher and last but not least you will find a complete new weather system.

All of them got winter textures and an improved sound.