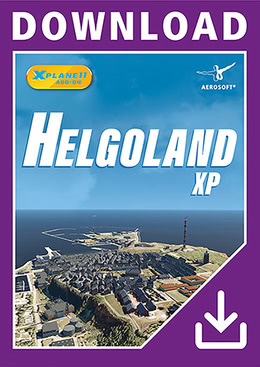 Helgoland XP is a scenery for XPlane 11 that recreates Germany’s only island in the open sea at a high level of detail and with many thrilling new options.

Forces of nature have reshaped the East coast of the side islet “Dune” over time. RWY 21 was previously blocked by a high sand dune that is now entirely gone. The southern end of the airport, however, is now a place where waves break around the tip of the runway. 10 years ago this has been surrounded by a large beach and construction teams are hard at work to prevent further loss of sediments.

In the wake of “green energy” Helgoland is currently becoming an important maintenance hub for nearby offshore wind farms. The existing military SAR base has been extended by a offshore maintenance helipad with its own hangar. From here you can fly your chopper to transformer stations out in the sea. All of them have their own helipad and make for a thrilling experience when approaching when waves are high.

For the wealthier visitors several airlines started to fly regular routes to Helgoland. Airlines serving the airport all use BN2-Islanders, the only multiple passenger aircraft that is allowed to land on the extremely short runways.