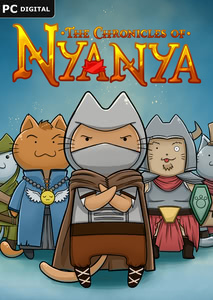 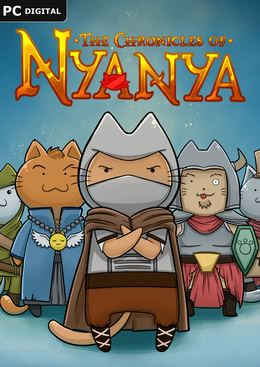 Thrilling like a payday, a story of cats in funny costumes that do RPGish things. It is full of many unexpected and incredible twists, the tragedies of an individual lured into the trap of an adventourist internship, and friendly pastry, which is very sensitive to nihilism.

The Chronicals of Nyanya also contains many thrilling conversations, walking around the map with some logical puzzles sprinkled in here and there — but don’t worry, even a liberal arts student should be able to solve them — raising pastry, and deliberations about important moral and existential issues, the majority of which will affect the ending you get. The ending will sum up the fates of the most important characters, in-game achievements, your proficiency in fighting the ultimate bad guy, your finesse in raising pastry and the degree of faith in friendship. This results in dozens of possible ending combinations.

Nyanya is an enormous cat world that can take up to 20 hours to fully explore. The main plotline itself is good for more than 8 hours of fun, but the game also includes many side quests found on numerous maps, hundreds of interactions with NPCs and over a thousand descriptions of nearly everything. You can also find dozens of exciting items such as the legendary Excalipurr and the frightening Berserker Catnip.

The role of the majority of animals is played by various kinds of rolls, which, together with cats, pidgins, and sneks, constitute the entirety of Nyanya’s fauna. Kibble is found in mines and on can triis, almost all buildings are boxes (because cardboard boxes are cats’ natural habitat) and cleaning fur is a matter of importance to the state. The sense and logic of this world are therefore highly debatable ... But don’t worry about its coherence. We made sure that it is top-notch.

All this mess is watched over by cat gods, such as the mysterious Great Bowl of Goodness — a giant stone leg, whose calf disappears in the clouds, Meowrida the Brave — goddess of shooting, and Overcat — the creator of everything that's feline.

An Internet connection and a Steam account are required.