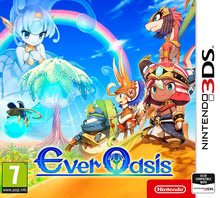 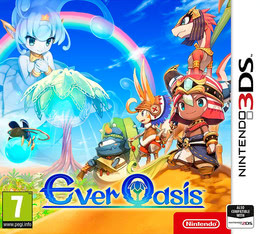 Explore the world to expand your oasis – and your adventuring horizons – in Ever Oasis, an all-new take on the adventure RPG genre, only for Nintendo 3DS family systems. From legendary producer Koichi Ishii comes a one-of-a-kind adventure packed with real-time battles, environmental puzzles and dangerous dungeons!

Chaotic beginnings
Long ago, the world was ensnared in Chaos – a dark force that threatened civilisations across the land. In order to shelter the people from harm, a prosperous oasis was built, but a powerful beast soon appeared in the skies above and rained down destruction, leaving nothing but ruin.

Create your own oasis
Now, as a chosen Seedling and descendant of those ill-fated people, it’s down to you to pioneer a new oasis, secure a peaceful existence for those who inhabit the land, and banish the evil Chaos once and for all.

Venture out
In contrast to your lively oasis, with its bustling shops all in a row, the desert is a harsh world where inhabitants live under threat of a dark force known as Chaos. With your desert-dwelling friends in mind, you must set off on an adventure across this cruel terrain – locate and explore puzzle-filled dungeons, engage corrupted wildlife in combat and forage for valuable materials.

Travel beyond the safety of your oasis and into a sprawling desert, collecting currency known as dewadems to make your oasis bloom with the help of the water spirit Esna. By sprouting up shops known as Bloom Booths and stocking them with wares, you can encourage travellers to frequent your oasis and help it grow!

Stand together
Allies from other tribes will join your cause, each one strengthening your team with a specific weapon and a unique skillset. Switch between three characters to utilise their skills in real-time battles, or even when solving puzzles. Certain weapons are more effective against certain enemies than others, and particular skills will help you to tackle puzzles in every dungeon – so it’s important to team up with the right allies for the job!

Give and let live
Curios claimed in the desert can be used as materials to craft other items that can be sold at shops, or given to weary travellers who visit your oasis. By donating your items to travellers in need, you’ll help them accomplish their goals and fulfil their wishes – they may even warm to the idea of moving in and living at your oasis as an ally!

Grow a prosperous oasis haven in order to thrive in a desert ruled by Chaos in Ever Oasis, only for Nintendo 3DS family systems.