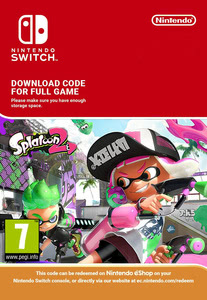 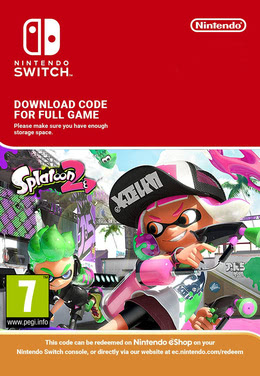 Claim turf anytime, anywhere, with anyone in Splatoon 2, only on Nintendo Switch. Traditional 4-on-4 turf battles return in this full sequel, along with returning modes, new stages, new fashions, new weapons and much more!

The aim is simple in Turf War: claim as much territory as possible by coating it in your team’s colours. The team with the most turf wins! Transform into a squid to swiftly swim through your team’s ink. Use these talents to scale walls coated in your colours to reach high-up vantage points, lie in wait for unsuspecting players, or cook up devious strategies.

Work with up to three other players to defeat waves of Salmonid and collect the treasured eggs they leave behind in this brand new mode.

In a first for the series, compete in local multiplayer Turf War battles, whether in TV mode or on-the-go in handheld or tabletop modes. Up to 10 docked Nintendo Switch consoles – eight players and two spectators – can connect via wired LAN, allowing players to create local Private Battle tournaments without the need for an internet connection. Online battles also make a return.

Play on the TV, in handheld mode or in tabletop mode using the Joy-Con or the Nintendo Switch Pro Controller (sold separately) and aim your ink using motion controls for accurate aiming!

Two years have passed in the world of Splatoon, and a lot has changed. Some familiar characters return under different circumstances, and new characters are introduced as well.

Updates will roll out post-launch, adding new stages, fashions and weapons, as the original game did.

An upcoming smart-phone application for the Nintendo Switch system will enhance matchmaking and allow for voice chat options.