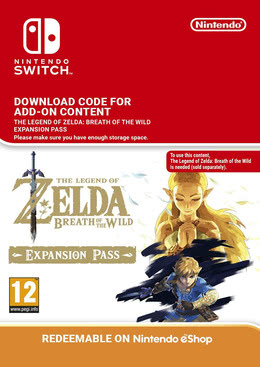 The Legend of Zelda: Breath of the Wild Expansion Pass [Switch Code]

The other two will deliver useful items. The first content pack is scheduled to launch this summer and will include the addition of a Cave of Trials challenge, a new hard mode, and a new feature for the in-game map. The second content pack will launch in Holiday 2017, and adds new challenges that will let players enjoy a new dungeon and a new original story. Content packs cannot be purchased individually.

Requires an Internet connection, main game "The Legend of Zelda: Breath of the Wild" and a Nintendo eShop Account for Activation and Download.