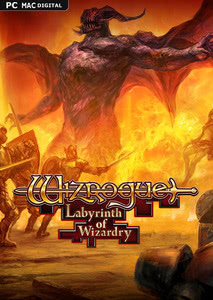 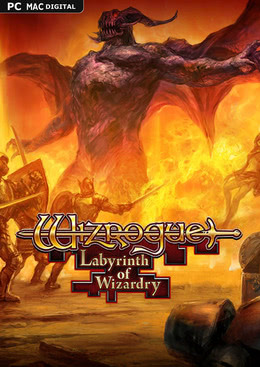 The legendary RPG Wizardry is reborn as a Rogue-like game. Terrifying monsters and countless traps stand in your way. Infinite eerie Labyrinths filled with terrifying monsters and countless traps to snare Adventurers. Your destiny is in your hands! Never far behind are the deadly battles and the creeping fear of being trapped alive. Take on Labyrinths with your own mighty party! Collect and train characters, build your own mighty party, modify items you find, and take on Labyrinths!

A new nostalgic experience is here!

There was a time when mad kings and grand wizards feuded over magical artifacts. A time when stories of dragons and their lust for treasure were not stories at all.
That is, until they faded into legend, and the Kingdom of Ardéme was born. Yet the road to prosperity is fraught with strife – a foul mist swept across the land. Its rotten reach was not boundless, however. An endless source of divine protection was found flowing from a single sacred cup: Holy Water. Nevertheless, the kingdom's demise was sealed when King Arthurus' closest confidant, Grand Sorcerer Ambrosius, was bitten by a vampire lord and fled the land with the holy cup in hand, never to be seen again.
With the fall of the once-mighty realm, the Miasma ravaged the land without mercy. Ardéme became a desolate uninhabitable terrain, and with nothing to keep its evil in check, the malevolence reached neighboring Camrone. Ardéme's heir to the throne, the young Prince Danjaq, was granted refuge by Camrone's ruler, Duke Baudricourt. Dreaming year upon year of reclaiming the cup, when the moment came to face Ambrosius, he met the same fate as his father.
The Miasma grew denser, hungrier, and more powerful by the day, gushing forth from countless mysterious Labyrinths littered across the land. Baudricourt, resolved to see an end to the crisis, assembled a force to investigate. Many lost their lives, as he discovered all too late that the Miasma possessed the power to manipulate the Labyrinths to act out its evil will, and without sufficient Holy Water to protect his troops they were like lambs being led to slaughter. With his numbers dwindling fast, Baudricourt ordered his Overseer, Alah'wi, to send word to the four corners of the land... "To Arms Ye Courageous Adventurers, Heed The Call Of Duty!"

And so begins the Age of Adventurers. A tale of Holy Water, the Miasma, and Labyrinths!