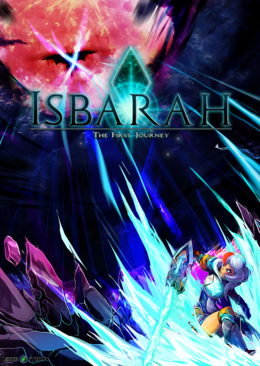 Isbarah is a blend between platform game and bullet hell. It is a particularly hard game where every level is an epic fight against a boss.
Every boss possesses his own unique patterns and to get out of this projectile hell, your mobility, your thinking ability and your dodging skill will be your best allies.
To bind these two gameplay together, you possess three powers:
•    Slow Motion : To analyze the situation and act with precision.
•    A multi-directional dash : To move with high speed and handle extreme situations.
•    An energy barrier: Drawing this wall will allow you to use it as a sheild or as a platform.

To survive in Isbarah, you have to handle correctly your powers ans movements. Everything is in the art of dodging.
•    18 epic duels
•    5 difficulty modes
•    90 rewards
Discover as well Isbarah’s story through short comic strip board, at each level.

When playing Isbarah, you follow Iria’s journey. Through her lineage, Iria is a goddess. In order to prevent it from falling into chaos, her father rule the world with an iron fist.  Iria is his weapon and sheild; she executes the divine punishments.
Isbarah’s is bound to the imaginary world that humans fantasize, encapsulating all their dreams and nightmares. Every single human mind contributes to shape it and to create an ever changing world full of an infinity of creatures and places. These fancied creatures are the Designers; they have a specific shape and their behaviour is influenced by the people who crated them.
Besides, another species lives there: the Designless. These creatures are only concepts, creatures that have not been fantasized by human yet. Designless deseperatly yearn for evolving into Designers and their nature drives them to infect them in order to grow more powerful and eventually take their shape.