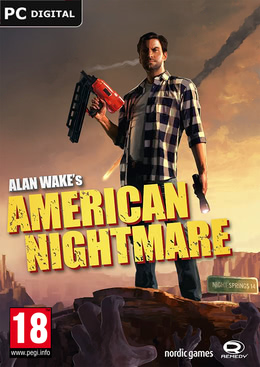 Alan Wake is considered to have disappeared for two years, and many have already considered him dead. Alan Wake learns this by collecting manuscript pages that lie all over the game and shed more light on the initially confusing story. As the story unfolds, Alan Wake learns of a dark double of his self, a kind of Alan American Psycho Wake, who repeatedly plays his cruel games with captured victims that Alan Wake can watch on television. The evil Alan Wake appears again and again in the course of the game and sends the Taken against the good Alan Wake, the protagonist. The thrilling new storyline, hordes of eerie enemies, serious firepower and beautiful Arizona locations combined with a new and challenging game mode make American Nightmare a must-have for Alan Wake fans and those who want to become one! Play the stand-alone story mode: While you fight your second psychopathic ego, the chair edge becomes your best friend. Fight until dawn: In this action-packed arcade mode, you'll have to perfect the "Fights with Light" method to survive until daybreak and send your friends to their ranks on the leaderboards. Will you experience the next sunrise? Face the darkness: Crazy and dangerous adversaries pursue you under the protection of the shadow. To get rid of them you have a powerful arsenal of weapons at your disposal.