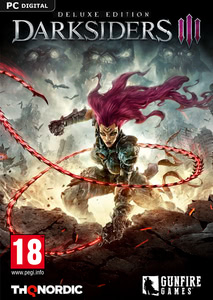 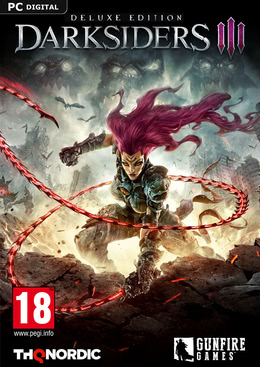 Return to an apocalyptic Earth in Darksiders III — Deluxe Edition, a hack-n-slash Action Adventure where players assume the role of FURY in her quest to hunt down and dispose of the Seven Deadly Sins. The most unpredictable and enigmatic of the Four Horsemen, FURY must succeed where many have failed – to bring balance to the forces that now ravage Earth. Darksiders III is the long-anticipated, third chapter in the critically-acclaimed Darksiders franchise.

Darksiders III will be provided with two download extensions after the release. These two DLCs are "The Crucible" and "Keepers of the Void". Both extensions are included in the Deluxe Edition.

"The Crucible" is a wave-based combat mode. Fury accepts the invitation of a strange being and gains access to the crucible. Here, Fury will fight wave after wave of enemies to unlock rewards and items.

In this mighty morsel of digital wonderment, competitors can expect to receive a truly earth-shattering experience: The Crucible!
A legendary challenge whispered with reverence across the universe. Not even the Creator could have envisioned such glorious spectacle as that which is found in this fabled arena.

All provided by the generous, steady hand of the Crucible’s Overseer. That’s right, it is I! Targon! Founder of this stupendous arena, and the only one ever to conquer it. So what say you, challenger? Do you have what it takes to surpass me?