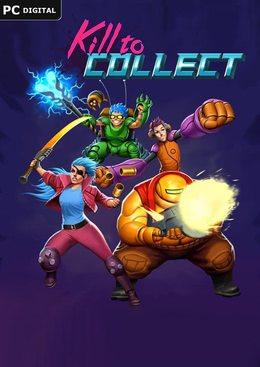 Kill to Collect is a cyberpunk rogue-like for up to four player co-op that is designed for short bursts of intense gameplay sessions, rewarding players for their skilled survival. Featuring procedurally generated levels, Kill to Collect brings a constant challenge. No two experiences are the same and every interaction could be the difference between life and death.

Set in Geoshelter Alpha, a dangerous and dystopian world that is the last known city on Earth, hired bounty “Hunters” patrol the lawless slums below to defeat enemies and reinstill order. Whether hired for money or glory, the “Hunters” all follow the same code: Kill to Collect.

Diverse Gameplay and Characters
You will play as one of four “Hunters,” each with their own abilities and fighting styles. With a diverse cast of characters, each single player run offers a different gameplay experience. Mix and match Hunters in co-op to create complementary team builds and unique synergies.

The playable characters include:

Strategic Co-Op Multiplayer
Encouraging collaboration and precision, Kill to Collect offers a unique co-op multiplayer experience so you can team up with friends to face the perils ahead.

80’s Cyberpunk Makes Its Comeback
Inspired by 80’s cyberpunk anime and manga classics, Kill to Collect delivers an action-packed, atmospheric experience with a synthwave soundtrack to power your runs.