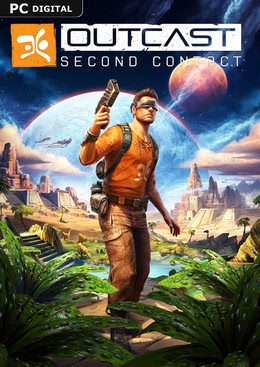 In the near future, humanity has discovered it is not alone in the universe, or rather… universes. Alas, the first contact with intelligent beings turns disastrous when a probe sent by the US government is destroyed by the Talan, natives of a world called Adelpha. The incident creates an energy cataclysm which threatens to destroy Earth. You take the role of Cutter Slade, ex-Navy SEAL, in an open, lush and living world, where all choices influence the balance of the world. Welcomed by natives as the “Ulukai” - a messiah of an ancient prophecy - you confront the formidable soldiers of a bloodthirsty tyrant by using a devastating arsenal of advanced weaponary. To save Earth, you must save Adelpha: the destiny of both worlds is in your hands.

Story:
In 2007, the U.S. government successfully sends a probe to an alien world in a parallel universe. As the probe is transmitting video images of the world, an alien life form discovers the probe and damages it, causing a disruptive backlash of energy to form a black hole threatening Earth. Former U.S. Navy SEAL Cutter Slade is given the job of escorting three scientists (William Kauffmann, Anthony Xue and Marion Wolfe) on a mission to this alien world to recover the probe and stop the threat. Arriving in this alien world, Cutter is separated from the other scientists and is hailed by the natives as their messiah, the Ulukai.