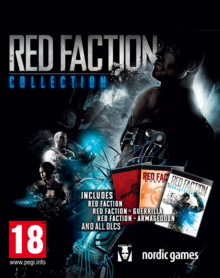 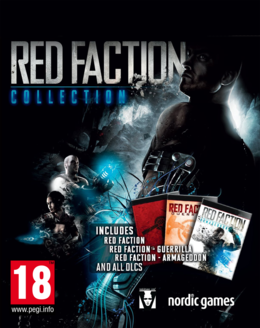 Red Faction:
Lured to Mars by the Ultor Corporation's promise of a better life, thousands have come to seek their fortune and work for the massive mining company. But all is not as it seems. A deadly plague is sweeping through the barracks, and miners suffer daily abuse at the hands of the Ultor guards. Is a revolution on the horizon?
Red Faction revolutionizes gaming with Geo-Mod technology, the ability to completely alter and destroy the environment in real-time. Featuring 5 controllable vehicles, 15 weapons of mass destruction, unparalleled multiplayer action, and a setting on Mars in the midst of a deadly plague and rebellion, Red Faction sets the gold standard in gaming!

Red Faction Guerrilla:
Red Faction: Guerrilla takes place in the year 2120. The Earth Defense Force (EDF), the allies in the original Red Faction, have become the main antagonist of Guerrilla. Although initially supportive of the Martian miners, Earth's natural resources have run scarce, and as a result, its world economy has collapsed from rampant speculation of commodities and lack of production. Under pressure by Earth's corporations and leaders to acquire the resources of Mars at any cost and at a pace to meet Earth's high demand, the EDF has forced Martian society into a permanent state of unfree labour. The newly-reformed "Red Faction" arises to revolt against the EDF, drive them off the planet, and begin fairer negotiations with Earth.

Red Faction Armageddon:
A long-dormant evil emerges from the caves of Mars, unleashing Armageddon on the planet’s colonists. With this force stopping at nothing to cleanse the planet of life, mankind finds itself poised on the brink of extinction.
Red Faction: Armageddon expands on the critically acclaimed, best-selling franchise with new, groundbreaking challenges. You are humanity’s last hope for survival.

Attention: This game requires a free Steam account to play.