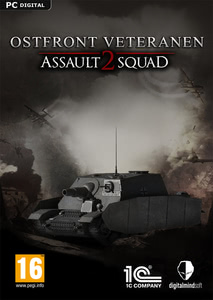 The Men of War series has a storied and acclaimed history after first launching in 2009. In 2014, Men of War: Assault Squad 2 updated the game with significant tech improvements as well as new single player style skirmish modes that take players from extreme tank combat to deadly sniper stealth missions. Commanders can face off against opponents on multiplayer maps ranging from 1v1 to 8v8 in scope.

Men of War: Assault Squad 2 — Ostfront Veteranen is a new faction DLC for the critically acclaimed RTS series and expands on the game with a new unit selection, unseen in the franchise so far. Join the battle as a new German faction with more than 10 new vehicles and experienced infantry squads, who earned their spurs on the toughest of all battlefields, the Eastern Front.

This product requires the major version of "Men of War: Assault Squad 2" to play.
Internet connection and Steam account required.