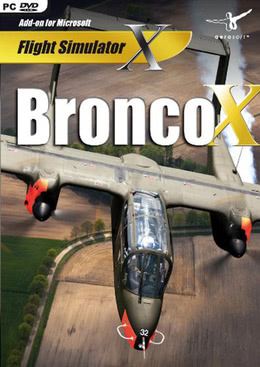 The Bronco has its roots deep in the 1960s when most military aircraft were getting bigger, more complex and above all faster. These aircraft did not work well in harsh conditions found in jungles and even on carrier decks. The OV-10 Bronco was the opposite. It was simple and rugged and could land on grass fields and even carriers.  These days their fighting role is over but they are popular aircraft at airshows where their unusual layout and smooth aerobatics make them welcome guests.

The Aerosoft OV-10 Bronco X was created with the help from people who still fly them, the OV-10 Bronco Association, German Wing.  We created the aircraft very much as they feel it should be done, as an aircraft that is incredibly fun to fly. We also decided it was a great way to do an aircraft that has simple systems done to a high degree of fidelity. If you master the engines of the Bronco at the high realism setting you really understand them. It’s the same with the electrical and fuel system. It’s an ideal aircraft to take up for a half an hour flight as it is easy. But to fully master the systems and calling yourself a "Bronco driver" will take some time.