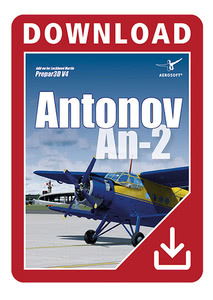 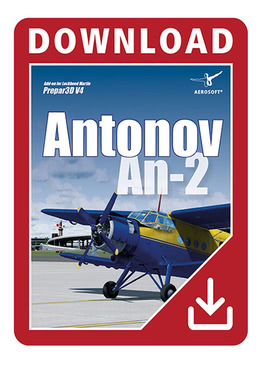 The Antonov An-2 (also known as Anushka or Colt) is a very strange aircraft. Designed as an agricultural and utility aircraft, it ended up doing almost anything an aircraft could do, from crop dusting, to parachute dropping. It can land on short, unpaved runways, will survive the harshest winter and the most gruelling summer and endure the heaviest abuse. No wonder that it was build up to 2001 event though it looks very much like the 1950s aircraft it is.

And those looks are spectacular. It’s a massive, single engine bi-plane.  As you walk closer it seems to get bigger and bigger until you are under the cockpit and look up to the massive radial engine. Take care here, oils leaking out is standard.

To make it work off-airport the An-2 needs to be simple and easy to maintain. So, there are no complex system – but there are a lot of simple systems. The cockpit is a sea of switches making learning to fly an An-2 not an easy task.

This version for P3D depicts that complexity in great detail. You will have to click a lot of switches and wiggle a lot of controls to get the engine to run smoothly. With an impeccable flight model you will be soon cruising the skies at a leisurely pace while dropping oil and making an incredible racket. It is a lovely aircraft!