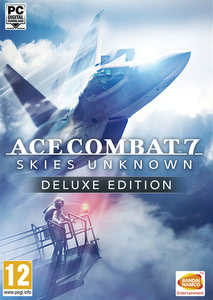 ACE COMBAT 7: Skies Unknown once again puts players in the cockpits of modern fighter planes. You can look forward to relentless air battles that will thrill you with their photorealistic look, intense action and countless authentic and futuristic aircraft. The spectacle is completed by a captivating storyline and even virtual reality!

In ACE COMBAT 7: Skies Unknown, the latest level of graphics engine development blends with the power of the latest generation of consoles and PCs to create immersive battlefields high up in the air. Fully rendered clouds fill the sky, while the feeling of supersonic speed is enhanced by highly detailed cityscapes. Together, these elements form the setting for the most spectacular air battles in the series' 20-year history.

ACE COMBAT 7: Skies Unknown offers players a comprehensive arsenal of cutting-edge and forward-thinking super-weapons to defeat opponents who should not be underestimated.

Purchase ACE COMBAT 7: SKIES UNKNOWN and get the playable F-104C: Avril DLC as a bonus.

Become an ace pilot and soar through photorealistic skies with full 360 degree movement; down enemy aircraft and experience the thrill of engaging in realistic sorties! Aerial combat has never looked or felt better!