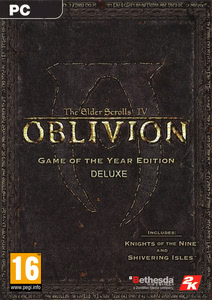 Oblivion Game of the Year deluxe edition presents one of the best RPGs of all time like never before. Alongside the critcally-acclaimed massive world of Oblivion are the Knights of the Nine and the Shivering Isles expansion, adding new and unique quests and content.

In the shadow of evil, a hero will rise from the ashes of a fallen empire. The gates have been opened, and the battle has begun. Only one thing can save the world from Mehrunes Dagon and the demonic hordes of Oblivion. The true heir of the Septim line must be found and restored to the Imperial throne. The fate of the world rests in the hands of one. Find him, and shut the jaws of Oblivion.

Knights of the Nine:Return the Nine to Glory - A fallen King has been unchained from the darkness of Oblivion to seek vengeance upon the Gods who banished him. Only a champion pure of heart can vanquish the evil that has been released upon the land. You must heed the call, reclaim the lost relics of the Divine Crusader, and return the Nine to glory.