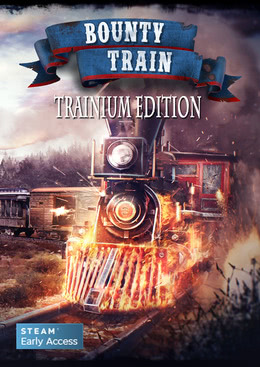 The developers from Corbie Games are about to bring the hard times of steamy railroads into a railroad-survival-simulation experience. Assemble your train, gather your crew and explore America. Drive from coast to coast, but only if you upgrade your locomotives, fight the bosses and solve the quests you are able to make it there alive.

Bounty Train is a complex game. Your character will be an engine driver, a train engineer, a fighter, a trader, and an investigator, probably all at once. This complexity requires a wide variety of game mechanics from different game genres, such as train simulators, real-time strategy games, business simulations and RPGs. It is difficult to create such a complex game from scratch, so we decided to do it step by step. In cooperation with our passionate players we hope to make Bounty Train an enjoyable experience.
Approximately how long will this game be in Early Access?
As a guesstimate: until early 2016. There's no exact date yet, so we will keep the community updated and we'll try to make it happen as soon as possible.

How are you planning on involving the Community in your development process?

Our players’ feedback is very important to us. As we are in relatively early stage of development, we still have the capacity to implement features suggested by the community. We'll gladly take their feedback in terms of bug-hunting and detecting any other issues that may arise while playing Bounty Train. We want to be as close as possible to our players and chat with the community in forums and mailing lists or via polls.

How is the full version planned to differ from the Early Access version?