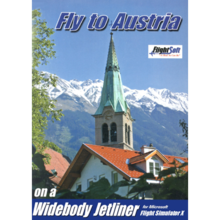 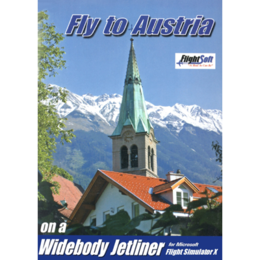 FlightSoft’s FLY TO AUSTRIA FSX is your passport to the Austrian Alps and such classical destinations like Vienna, Salzburg Linz and of course Innsbruck.  You’ll want to touchdown on Vienna’s extraordinary international airport remember to dodge those crosswinds, bumpy air mass, and snow blowing across your windshield as the airport comes into view down below.  Those blustery winds blowing snow on your windshield can wreak havoc with your vision but you’re paid the big bucks to see thru the difficulties.  So just guide that airliner down the glide slope and focus on the centerline of the runway coming into view down below and land her gently.   Bring those thrust reversers in gear and drive her down the runway till you’ve slowed down to taxi speed then head over to the Terminal Gate.
Remember the Vienna Philharmonic has renowned conductor Ricardo Chailly tonight and you’ll want to head over to the hotel, take a shower, and freshen up before your limo arrives for the symphony tonight.  After the illustrious concert head over to the Four Season’s Hotel for dinner.  A good night’s sleep then bright and early in the morning you’re scheduled to fly to Innsbruck for some skiing down those illustrious Austrian Alps.  Those ski slopes are no less challenging than flying a wide body jetliner into Innsbruck’s spectacular airport.   So … place those goggles on, put your ski mask on your face and head down the slopes to the clubhouse for some gin and tonic plus a light brunch before another adventure on the ski slopes before heading back to the hotel.

FlightSoft’s FLY TO AUSTRIA FSX is a breathtaking new title with lots of opportunities to test your pilotage skills in a variety of different venues from snow blowing win drifts to fog challenged visual approaches and those airport’s on the Austrian Alps will offer plenty of bright sunny skies outside your cockpit window too.   So … get onboard and buy a few copies of this title … you know they make great gifts for family and friends and you definitely don’t want to be found missing this title in your flightsim library.

COME FLY TO ALL THESE DESTINATIONS IN AUSTRIA with  Fly to Austria FSX
VIENNA - SALZBURG - INNSBRUCK - LINZ -  AND MUCH MUCH MORE!