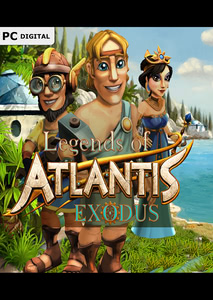 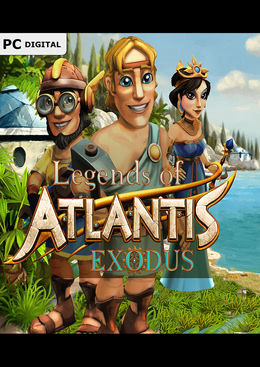 Atlantis is facing its end of days. Massive tidal waves are sweeping away its coasts, earthquakes shake its mountains, its fields are in flames and its cities are falling apart. The player takes on the role of the champion of the last Queen of Atlantis as they work to save the people of Atlantis and fight to save their kingdom.

In Legends of Atlantis: Exodus the player must evacuate Atlanteans from their homes before a series of disasters sinks the cities beneath the waves. The player does this by clearing paths and building various types of roads to the various dwellings that populate Atlantis, connecting them to the edge of the map and allowing the residents to escape. Along the way, the player may also be given other goals that they need to achieve: to retrieve priceless relics before they’re destroyed, to dig canals, to drain water away from towns and cities, and chasing off enemies that block the escape routes.

The world of Atlantis can be divided to 4 main locations: The Emerald Coast, the Golden Sand, the Iron Mountains and The Capital. Each of the places is suffering from a different disaster, but players must still do everything they can to rescue the citizens of Atlantis and preserve the ancient treasures the city has guarded for a thousand years.

The player must evacuate a total of 50+ levels from the 5 different areas of Atlantis. Each area is threatened by a different natural disaster which themes the difficulties the player faces there.