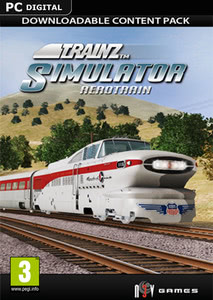 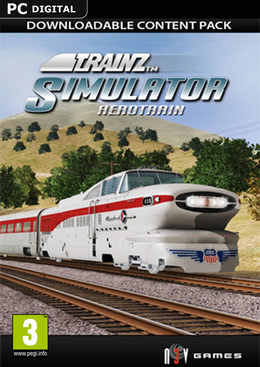 By the 1950's,  passenger revenues on America's railroads had long since passed their heyday.  Automobiles were fast becoming an affordable option for the modern traveller, and flight was also steadily gaining in popularity.  If railroad passenger services were to survive, operators realised they would need to change their thinking and somehow take a more cost effective approach.

The General Motors also took note of the changing age, and sought to provide a solution for it's valuable customers.  If passenger equipment could be built, operated and maintained at greatly reduced expense, the railroads might stand a better chance against their subsidised competitors.

A locomotive design based on the existing SW1200 switcher was encased in a futuristic streamlined shroud. An usual Bo-1 wheel arrangement was employed and the drivetrain geared for passenger operation. The turret cabbed locomotive would be known as the LWT12. A finned tail car with a small observation gallery completed the stylised trainset exterior, and in 1955 the GM Aerotrain was born.

Two demonstrator sets were built and initially toured country wide, operating over numerous systems. Pennsylvania Railroad was the first to test the innovation in regular service, operating it between New York City and Pittsburgh as the 'Pennsy Aerotrain'.

New York Central, introduced the consist as the 'Great Lakes Aerotrain', taking over the Chicago to Cleveland section of the former 'Lake Shore Limited' route.

To the west, the Aerotrain was trialed on the Atchison, Topeka and Santa Fe Railway as a 'San Diegan' consist, running between Los Angeles and San Diego; and on Union Pacific metals,  it worked out of Los Angeles over the 'City of Las Vegas' route.

Whilst the railroads welcomed the idea as a possible answer to their falling revenues, each reported much the same experience.  Underpowered, rough riding, and largely less practical than traditional equipment, the 'Train of Tomorrow' this was not to become.

In 1957 both demonstrator sets were sold to the Chicago, Rock Island and Pacific Railroad, where they would spend their days in Chicago commuter service until being retired in 1966.

Today both Aerotrain locomotives and some of the cars survive as inoperable exhibits. GM T1 is on display at the National Transportation Museum in Kirkwood, Missouri. GM T2 can be found at the National Railroad Museum in Green Bay, Wisconsin. A third locomotive was constructed for Rock Island's experimental Talgo 'Jet Rocket' train, though the locomotive and cars were not preserved.

We would like to acknowledge the kind assistance of one of GM's former chief designers, the late Charles M Jordan who was largely responsible for the developement of the Aerotrain's futuristic styling; and who provided us with technical and visual data several years ago."

Gone but certainly not forgotten. The GM Aerotrain addon pack takes you back to the streamline era when this stylish train toured the railroads of the USA as a proposed means to the future of passenger haulage.

Requires the base game Trainz Simulator 12 installed to activate.