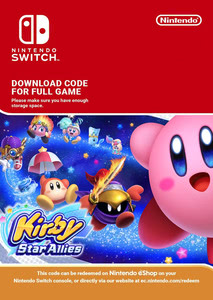 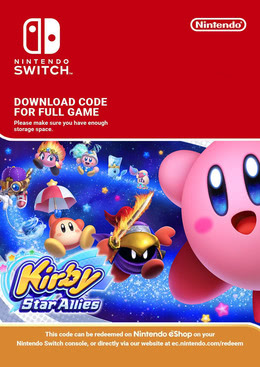 The pink puff is back – in HD – and he's not alone.
Kirby is back! But this time, he’s not alone. Recruit enemies by hitting them with hearts, and gather helpers for a party of up to four characters. On top of that, you can join with up to three friends* for a different kind of team-up action!

Kirby Star Allies will debut new Copy Abilities! Unleash your creativity with the Artist ability, or ensnare enemies in webs with the new Spider ability.

You can even mix and match ability combos to create new Friend Abilities! Combine water and ice to make an icicle lance, toss a friend with friend throw, and more!

With four-player co-op*, you can open up new paths by sharing Copy Abilities and working together! Powerful enemies will stand in your way, including an unknown deep-space threat.

Can Kirby and his friends join forces to save Dream Land?