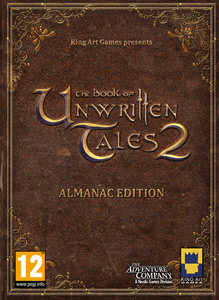 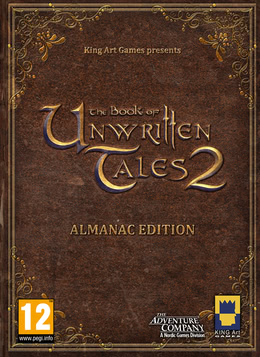 The Almanac Edition Extras:
104-page Artbook (as pdf)
Over 100 pages of concept art and comics by the game’s concept artist Marvin Clifford, along with Making Of renderings and background info.

Making-Of Video
Peek behind the curtain of how The Book Of Unwritten Tales 2 takes form and watch all the videos of our Video-Blogger Danica, who will follow and document the development of the game.

The Orchestral Soundtrack (as mp3 files)
Benny Oschmann who wrote the acclaimed soundtrack of the original game is back on board for the sequel. The Soundtrack will feature all tracks from the game, both reworked classics from the first game and new compositions.

A double-sided poster (printable)
Two sides, two beautiful pictures. One poster to rule them all.

Exclusive in-game content "Color Your Critter"
Only those who call the Almanac Edition Extras their own will have access to this exclusive feature. It lets you change the color of Critter, Nate’s much-loved furry companion. Give Critter your favorite color or change it as often as you want – the colors of the rainbow are at your command!