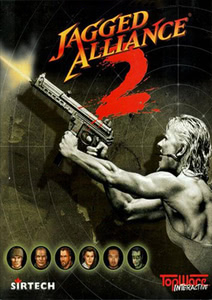 A ruthless dictator has taken control of the tiny nation of Arulco. The country's large army has a terrified population in its iron grip, itsonly opposition is a ragtag bunch of rebels. And even if it is a totally crappy, corrupt regime, don't suppose for one moment that you as the liberator will be greeted with open arms. The bad news: you're incharge of the rebels. The good news: some of the world's best mercenaries will fight on your side...if you can afford them. Ahead lies asavage struggle for freedom. To win, you'll need the negotiating skills of a diplomat, the strategic genius of a general, the battle tactics of a commando... And A Whole Lot Of Guts. ONLY THE BEST OF STRATEGY + Incomparable depth of gaming combined with a non-linear gameplay + A unique mixture of real time reconnaissance and turn based combat + You influence the smallest details of every tactical move AND ROLE-PLAY + Create your own optimal mercenary. + Interact with more than 150 characters. + Recruit teams of mercenaries all with their own unique personality. + The likes and dislikes of mercenaries between themselves influence the motivation and skill of a team. + Mercenaries have an excellent memory for the behavior of the gamer: + Good and bad experiences have their own effect on the players game. + Three difficulty levels