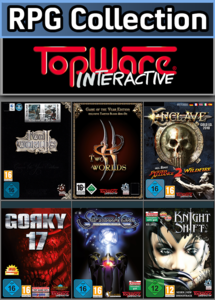 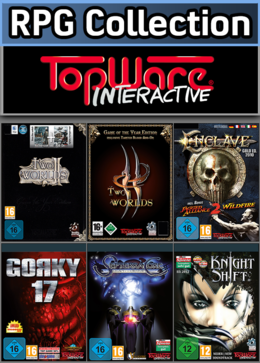 Two Worlds Goty
To all intents and purposes you're an unscrupulous bounty hunter and mercenary - but the search for your sister takes you back to your roots.
At the beginning of your epic adventure, a mercenary task takes you to the far north - but you're also following up a mysterious lead at the same time - the first clue you've been given since Kyra's disappearance. You get a shock during a meeting with the delegates of a dark Brotherhood - your sister's kidnappers are indeed after your family's relict. Whether there's any truth in your family being chosen ones or not, the others obviously believe it - and if you ever want to see Kyra alive again, you'll have to act swiftly...

Two Worlds II Velvet GotY
Who can you TRUST in times of TREASON?
Five years have passed since dramatic events brought the whole world to the edge of the abyss. The hero is a prisoner in the dungeons of Gandohar's castle. His hopes of saving his sister vanished with his freedom. Just as despair threatens to overcome him, hope comes from where he would have least expected. The Orcs, a race the hero had always hated, have put together a rescue squad that frees the hero from his bonds.
The Velvet Game of the Year Edition contains the Two Worlds II main game as well as the expansion Pirates of the Flying Fortress!

Enclave Gold
The ENCLAVE GOLD Edition provides an astonishingly masterful blend of the best Action, Adventure and Role-Playing elements in a way you have to see to believe!
The riveting combat system is complimented by numerous artfully-crafted cut-scenes, vibrantly narrating the nuances of the hero's epic journey as players explore the bountiful environments of the expansive fantasy world. During their travels players will engage in several spectacular boss-opponent battles all guaranteed to enthrall the player. Each of the diverse encounters requires the player to adapt their combat strategies, since they must select just the right combination of skills in order to overcome the stiff challenge and slay these formidable battle hardened adversaries.

KnightShift
Do you like Real Time Strategy? or are Role Playing Games your preference…
Why not try both genres in one? …or even both separately? … In one game: KnightShift!!
In a mystical world beyond fantasy and imagination, where corruption and disaster go hand in hand, not all is as it seems. A dark adventure begins in the RPG part: divided into eight chapters of dungeons, rare treasures, very strange companions and gruesome opponents. Eight individually equipped characters are available to you in this action packed role-play. It is now down to you, the player to form your hero and help him to fame and victory.

Jagged Alliance 2 Wildfire
Even if the regime is totally inept and corrupt, don't suppose for a moment that you as the liberator will be greeted with open arms..
Jagged Alliance 2: Wildfire brings you back to Arulco. The population is being terrorized by a reckless army; in the meantime the main export goods are drugs. Subversion and fraudulence has infiltrated all levels of local government and the ever-present Mafia has his fingers in many pies. You are working undercover on behalf of the US government and your goal is to destroy the mighty drug cartel. You'll need a skilled hand to put together the right team of mercenaries and the negotiating skills of a diplomat to get the sceptical population on to your side. You'll also need the strategic genius of a general and the fighting tactics of a guerrilla.

Gorky 17 aka Odium
November 2008. NATO intelligence services report that, for reasons unknown, the Russian military has destroyed GORKY 17, one of the old Soviet "Secret Cities". Diggers discover a laboratory complex in the completely demolished town. Shortly afterwards the town's previously deserted streets are suddenly teeming with hordes of grotesquely deformed creatures. A team of three NATO specialists under the leadership of the Canadian Cole Sullivan is sent in to examine the horrifying events on the ground. Will they discover the terrible secret of Gorky 17? And more important - will they live to tell about it? Be prepared for intrigue, betrayal and even some romance. A host of multiple-choice dialog scenes present you with constant choices - many of which can have some unpredictable effects ...

Septerra Core
At the very heart of Septerra lies the Core, a huge Biocomputer. Seven continents at different elevations, each with its own unique people and culture, orbit around the Core. According to an ancient prophecy, Septerra's continents will one day converge and join in orbit together on one level - this is the Legacy of Marduk, the Creator's son. The Chosen, fanatical believers in the supremacy of their own wisdom and technology, impatiently try to force the issue - causing a global catastrophe which threatens the lives of all Septerreans.
Meanwhile, amongst the Junkers, a young woman named Maya gets caught up in the developing maelstrom and soon finds herself confronted by seemingly insurmountable problems. Without help she stands no chance of fulfilling the Prophesy before Septerra perishes.