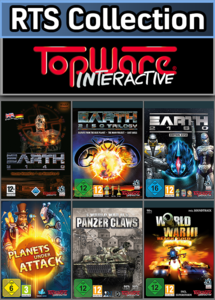 Get the complete Earth 21x0 saga, a milestone in gaming history, including all expansion packs. Become a strategic commander at the highest level with World War II: Panzer Claws and World War III: Black Gold.

Earth 2160
THE FUTURE OF MANKIND BEGINS WHEN THE WORLD ENDS ...
After the destruction of the Earth in 2150, the survivors of the human race populate Mars - but this new homeland of theirs conceals a long-forgotten and dangerous presence from a far-distant world. Your heroes and your armies will need strong leadership to take them on a spellbinding odyssey that has everything a gamer’s heart could wish for breathtaking worlds in space, battles against cunning enemies and even downright treason from your own government faction - are you up to it? Accept the challenge…let this gripping RTS trilogy thrust you into the far future… and YOU will decide the fate of the universe!

EARTH 2150 Trilogy
Your heroes and your armies will need strong leadership to take them on a spellbinding odyssey that has everything a gamer’s heart could wish for breathtaking worlds in space, battles against cunning enemies and even downright treason from your own government faction - are you up to it? Accept the challenge…let this gripping EARTH 2150 RTS trilogy thrust you into the far future… and YOU will decide the fate of the universe!
The Trilogy includes EARTH 2150 Escape from the Blue Planet, The Moon Project and Lost Souls!

EARTH 2140
The year is 2140.After numerous wars and several environmental disasters, only two world powers remain; the United Civilized States (»UCS«), covering the American continent, Western Europe and North Africa, and the Eurasian Dynasty (»ED«) covering the coherent landmasses of Eastern Europe and Asia. The damage caused by the long wars led both world powers to evacuate the population to recently built underground cities.
Natural resources are becoming scarce and have to be extracted above ground. There have been a number of small conflicts between the UCS and the ED, the last of which escalated and became a fierce and bitter war - the final world war. Only one side can win. This final war will decide who will get the last of the available natural resources and ultimately rule the world.

World War II: Panzer Claws
World War II: Panzer Claws [aka Frontline Attack: War over Europe] pushes back the boundaries of real-time strategy gaming! Take control of the Allied, German, or the Russian in the harsh reality of the battlefields of World War II. At your disposal are a vast number of vehicles and tanks, as well as ground troops and the ability to call in air forces when needed.
Panzer Claws II: In 1940, France fell beneath the dark tide of war. During the early days of the occupation, the French government capitulated, and formed a collaborationist state. While the country was under enemy control, resistance fighters took to the hills, and back alleys. These brave souls began mobilizing for a fight against their occupiers, and mis-directed government officials. This version contains both parts: Panzer Claws I and Panzer Claws II.

World War III: Black Gold
Actual Armies. Actual Weapons. Actual Political Issues.
World War III - Black Gold takes the player to the near future. The political crisis has been going on for months, leading to worldwide turmoil. A secret conference of the UN Central Geological Commission reveals that worldwide oil reserves have reached dangerously low levels: Oil reserves will run out within 8-10 years. This proves too short for even the most highly industrialized countries to switch their economies to alternative energy sources. Soon, mass protests erupt all over the world, effectively shutting down the global economy. The Great Powers have declared WW III...

Planets under Attack
Planets under Attack offers a surprising depth of gameplay, while its intuitive controls allow even casual gamers to pick it up and feel comfortable immediately. In addition to the addicting gameplay, Planets under Attack is an obvious labor of love.
An exciting and memorable cast of characters exist perfectly in this artistically beautiful world. From the ships to the planets, everything has an essence of its own, with a memorable soundtrack and comical sound effects breathing life into the visuals. The goal of this challenging space adventure is to conquer a galaxy of planets, while undertaking a multitude of special challenges. Take control of your mighty space armada, and wreak havoc across the cosmos, but choose your targets wisely!