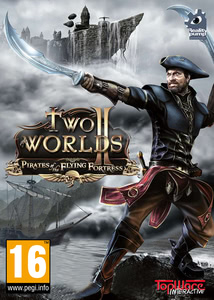 With over 2.5 million copies sold of "Two Worlds II" afterits release in the Winter of 2010, and more than 4 million copies sold of the first "Two Worlds"installment, not to mention the numerous awards and a huge fan-base are all very strong argumentsfor yet another exciting trip to Antaloor. Only this time around, face the harsh seas and treacherousplots in a land filled with pirates! Plunge headlong into an adventure more surprising than ever before in a land that is vaguelyfamiliar, but vastly different. With exotic flair, new enemies and new settings - you're sure to get anasty surprise! A band of fame-hungry pirates led by the legendary Captain Ed Teal, have becometrapped in a cursed archipelago when their ship ran aground, where they will be damned to remainforever until aided by a hero with a strong back and a (somewhat) loyal disposition. Plots within plots and schemes within schemes devolve the crew of the WanderingWrath into mistrust and outright mutiny, and all the while the lives of the islands' innocents hangperilously in the balance. Trust might be said to be the rarest of all currencies, and none willbe found here by any unwilling to shed a little of his own... or a few buckets of blood.