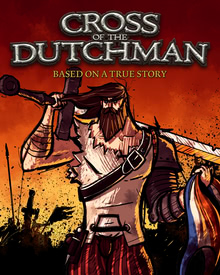 In Cross of the Dutchman, you play as Pier, the farmer who turned into the commander of a Frisian army, an example for all people who were oppressed by the Saxon invaders. While leading the rebellion you will get to meet and befriend historical characters and let them join your cause for freedom!

You will explore the Frisian landscape as it was during the 16th century and experience first hand how people struggled to survive during these times of conflict. Travel to villages, farms, forests and other landmarks and collect and find the treasures and gold that is hidden all over Frisia.

Lead by example with your formidable sword which inspires fear and respect with even the toughest of enemies. The legend says that Pier was able to cut down multiple Saxon mercenaries with a single blow! (The sword is nowadays displayed in a museum in the Netherlands)

During the game, you will be able to help Pier by improving his abilities and making him even more powerful. Using your sword and fists you will make your enemies tremble!

Key Features of Cross of the Dutchman:

And the best Steam features: